The Superdome is a wholly enclosed, fully air conditioned arena with seating for up to 20,000 people - the largest indoor space in the Southern Hemisphere. It was designed as a completely flexible entertainment and sports facility permitting a diverse range of performances from basketball to ice hockey, rock concerts to circuses.

The $200 million arena opened in the tail end of 1999 and served as the venue for a number of events at the Sydney 2000 Olympics including gymnastics and basketball. Cox Richardson designed the facility in association with Devine Deflon Yaeger, and it received the IOC/IAKS Silver Medal in 2003.

The bowl of the Superdome's main arena was conditioned using TROK jet nozzles. Eight separate arrays of 16off DUK-V-K/400 jet nozzles located 8m above the floor and discharging at a 20° upward angle supply over 51m3/s of conditioned air across a 26m throw with a terminal velocity of <0.1m/s and 35dB(A) sound power level. 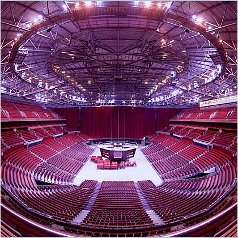