This facility, which includes an auditorium that seats 2100, a cafe with indoor and alfresco dining for 300, parent’s rooms, a guest lounge, a television production suite, several multi-purpose training rooms, and a dance studio was built mainly with volunteer labour over a two year period, and set a new standard for worship venues in New Zealand.

The volunteer labour poured over 725 truck loads of concrete covering the equivalent of 8 acres, handled over 80 tons of steel and 1300 sheets of concrete reinforcing, laid over 60km of wiring for electrical, controls and data, and assembled and installed over 300 lineal metres of ducting. Working every Saturday over 2 years, with an average of over 300 people involved at any given time, the volunteer labour force worked approximately 100,000 hours saving over $4M, approximately 25% of the cost of the building. Specialist trades were only required for pipework, fire protection, gas, and specialist audio and video areas.

The acoustic design was reworked by Cooke Industries staff, to improve on the original designed specification of PNC35, with the aim of lowering it below PNC30. This was achieved by reducing duct velocities, incorporating internal acoustic lining inside the air handling unit, and utilising COMEFRI direct drive airfoil bladed plenum fans, which were selected for their exceptional acoustic performance.

The noise levels were independently verified by acoustic engineers from NDY, with PNC25 achieved with just the two main units running, and PNC27 with the addition of the stage unit - virtually inaudible. 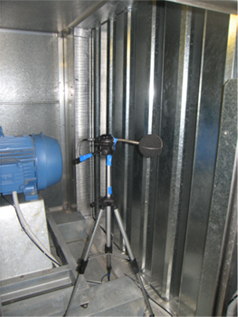